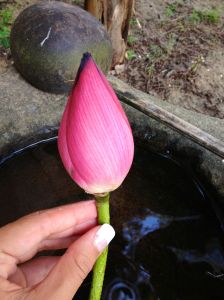 While we were in Ho Chi Minh, I visited a brothel for the first in time my life. With my 13-year-old daughter in tow.

At least, I think that’s what happened.

We’d been walking for hours in the stupefying heat – first to Saigon Square, a shopping centre my daughter wanted to visit, then on a circuitous route down to the harbour. We planned to check out our options for a family boat trip, taking in the sights of the city along the way.

My boyfriend and son were visiting the War Remnants Museum – an experience my daughter and I thought would be too ghastly for us. So the whole afternoon stretched before us, a chance just to wander and look.

Even five minutes into our journey, I could feel the sun searing my neck and shoulders. And the reflected heat from the footpath was making me woozy.

We’d already passed half a dozen hair and beauty joints and I was contemplating the possibility of a foot massage and pedicure at the end of our journey.

The going rate was the equivalent of about US$5 – an enticingly affordable luxury.

I suggested this to my daughter, who responded at first with disinterest; her young feet and legs don’t suffer the way mine do in the heat. But later she asked if she could have a French manicure instead.

There are approximately 3.5 million motorcycles and scooters in Ho Chi Minh, and their presence shapes the feel of the city in ways that kept twigging a smile to my lips as we walked. 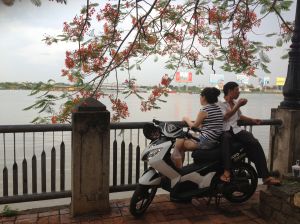 From the throng of riders scooting along the streets – solo ones, cuddling couples, families with babies – to the way people park on the footpath and use their motorcycles as impromptu seating while they socialise or eat their lunch, I loved all of it.

Walking by a boarded-up lot, the gate slightly ajar, I craned to see inside. I expected an excavation pit or building in progress, but instead I was greeted with the sight of a pop-up parking lot, crammed full of motorbikes.

We passed street vendors selling fresh vegetables or bottles of soft drink chilling in buckets of ice. But we had nowhere to cook and, despite my thirst, I craved something other than soft drink in the near 40 degree heat. So we walked on without buying anything.

Eventually we saw a vendor ahead selling iced drinks in plastic bags with straws.

I have no idea what was in them, but they looked refreshing and good. Several times as we got closer, locals pulled over on their motorcycles, bought a drink and drove away.

I wanted to buy one, too, but I didn’t know what to ask for, and I was struck by a sudden attack of shyness.

If I’d been on my own, with no one but strangers to look foolish in front of, I’m pretty sure I would have done it. But with my daughter beside me, I kept walking, telling myself several times it wasn’t too late to go back and ask, but never balling up the courage to do it. 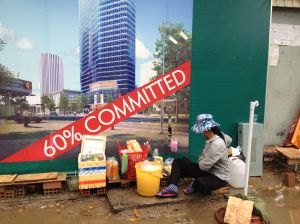 We headed down to the waterfront to look at the ferry timetable and the costs for booking a lunch cruise. Finding nothing that would fit with our plans, we turned and headed for our hotel. It didn’t matter too much – the afternoon had been laden with subtle new experiences that we were still quietly soaking in.

As we passed through the centre of the city, on the home straight, a woman gave us a glossy brochure for a beauty salon. The rates were exorbitant – equal to what you might pay in Sydney – so I thanked her and walked on.

Within a block, another woman approached us with a brochure for beauty services. Again, the prices were higher than the services closer to our hotel, but only marginally – six dollars for a pedicure rather than five. We were exhausted and more than ready to settle into a comfy chair for a while, so I told the woman we were interested.

She led us down a side street, then into an alley and up a winding staircase. By the time we walked into the alley, I was a bit wary. Where the hell was she taking us? Was something dangerous afoot? I nestled protectively close to my daughter, poised to fight and flee.

But the labyrinthine route we were taking was heavily peopled, with stalls and restaurants all down the alley, so I figured it was safe to keep following.

Inside the beauty parlour, the air was stifling. They turned on the air-conditioning as we walked in, and I felt a pang of injustice that the women working there had to endure the wilting heat whenever there were no customers in the rooms.

The premises were clean but a bit bereft, with the windows blocked out against the heat, a few plastic plants for decoration and Christmas tinsel tied to the railing of a staircase to our right. It was late May at the time.

The beautician offered to give me a manicure too, looking dubiously at the blunt little nubs of my fingernails when I told her I was fine.

My daughter got gel nails and a French polish – a process that took hours – much longer than my foot massage. She settled happily into it, and – never having experienced it myself – I wondered how anyone could find such a laborious process relaxing.

Anxious to be back in our hotel room with the boys, I found it hard not to fidget.

Then a surprise broke the monotony. An Australian man in his fifties appeared on the tinselly stairs, rearranging his clothes and loudly thanking an unseen woman upstairs as he descended.

He approached the lady manicuring my daughter’s nails, calling her by name, and leeringly told her that next time he wanted her to be the one to ‘look after’ him.

My skin prickled with revulsion. I looked at my daughter to check her reaction, but thankfully, she was too rapt with her newly shiny nails to think anything of the exchange.

I had planned to loiter in the laneway when we finished, to soak up the sights and smells of the street food. But suddenly it felt like we couldn’t get away far enough or fast enough.

I had suddenly reached my threshold for new experiences for one day.