A few years ago, my son spotted a remote control helicopter out the back of a charity shop as we dropped off some clothes. He immediately wanted to buy it.

Unfortunately, the bloke at the store said he couldn’t sell it to us. Because it was a potentially dangerous, untested electronic item, he was supposed to throw it away.

However, he mused, perhaps he could trust us to take it and throw it away for him? Wink wink nudge nudge.

My son joyfully brought the helicopter home, powered it up and launched it high in the air on its maiden flight. It span briefly at its apex, burst into flames and plummeted to the ground, smashing on impact.

Far from being disappointed, he was thrilled by the unexpected outcome. 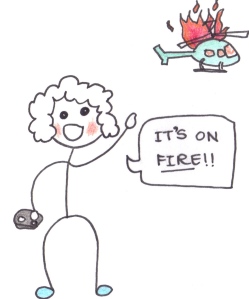 It seems a pretty safe bet that without the element of fire, the malfunction and destruction of the helicopter would have registered at the other end of his awesomeness scale.

Fire transformed a potential catastrophe into a moment of magic.

Keen to learn more about why we’re drawn to fire, I stumbled on some recent research that gave a disappointing answer: fire-wonder is essentially just a by-product of ineptitude.

Since children in societies that use fire as an everyday tool lose their fascination with it by the age of seven, the research suggests that us domesticated types are spellbound by it into adulthood because we yearn to gain mastery of it.

There’s no denying fire captures our imagination. The world’s biggest sporting event opens with the lighting of a cauldron, and our vocabulary for love and attraction brims with fire. We kindle a romance or carry a torch. We burn with desire or are consumed by passion. And the person we love is our flame.

But far from longing to master it as the evolutionary anthropologists suggest, I think we relish the mystical power fire has over us.

Try inviting a bunch of your grown-up friends around for a bonfire and watch them become ensorcelled by it.

Sometimes, they’ll talk to each other, but their gaze will remain firmly on the flames. Other times, the conversation will lull as people become so mesmerised, they are struck dumb and can do nothing but stare into the blaze.

They will feel compelled to poke at the fire and toss things into it.

It might be so hot they have to turn their faces away and shield their eyes to get near it, but they will squat as low as they can, crab-shuffling towards it with one arm outstretched just so they can offer it something.

Long after the magic and wonder of childhood has lost its potence, and in a world where most mysteries can be unravelled at the click of a Googlified button, fire is one of those rare, familiar things that continues to elicit awe.

And passing this fire-wonder from one generation to the next is one of our most cherished rites.

While we do all the responsible things to educate kids that FIRE = DANGER, telling them about bushfires and house fires and not playing with matches, we nonetheless ensure their enduring fascination with it when we honour the biggest, most special moment of their biggest, most special day each year by presenting them with…

A SLAB OF SUGARY DELICIOUSNESS CROWNED WITH A MAGICAL INFERNO!