As a child, I had the misfortune of being labelled the brainy one. My younger brother scored the accolade of being sporty.

Don’t get me wrong, I saw my smartitude as a wonderful thing. When I grew up, I wanted to become a doctor and get a PhD and end world poverty. But I was less thrilled that braininess seemed to rule out the possibility of having any sporting prowess whatsoever.

When I was four, I dislocated my hip on a trampoline at a birthday party, and my mum had to take me home early, my leg dangling uselessly – and probably somewhat sickeningly as far as spectators were concerned – to one side. 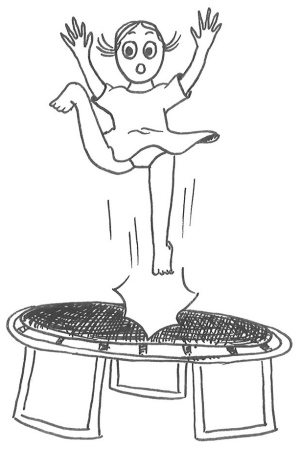 I regularly sprained my ankle.

And to this day, my greatest sporting achievement remains the time that I crossed the line first in the egg-and-spoon race in kindergarten. 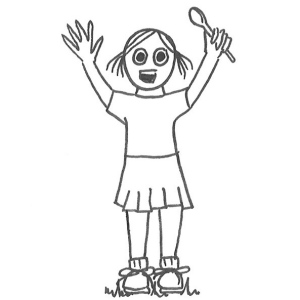 Unfortunately, I didn’t understand the rules properly, and I was disqualified because I didn’t have my egg on the spoon at the time I crossed the finishing line. It had fallen off some metres earlier, and thinking I wasn’t allowed to use my hands to put it back on, I valiantly completed the race stooped over and belting the egg along the ground with the spoon. 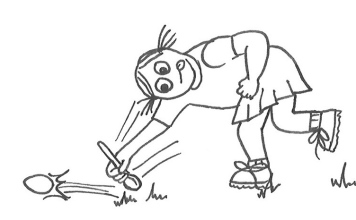 Still, the knowledge of my utter uncoordination never stopped me from giving it a crack.

In primary school, I tried out for every sporting team imaginable. Summer and winter. Every year.

I never even made it onto a shortlist.

Undeterred, I also competed in every event I could at the school athletics and swimming carnivals. As soon as I was old enough, I swam in the 800 metre freestyle.

I can swim a really long way and never get tired. But I can’t swim very fast.

Minutes after all the other competitors had left the pool, I was still cruising along.

Fortunately, it had been drilled into me early in life that it was important to try your best at everything and never give up. So I felt no shame that everyone was standing around watching me thrash about in the water, alone. I was not humiliated by the fact that they were waiting with gritted teeth for me to finish up and get out of the damn pool so they could start the next event.

I was accomplishing a laudable feat of perseverance.

Even though I went on to a selective high school – where sporting aptitude was not in abundant supply – I never made it onto a competitive team until Year 11. By which time everyone else was too busy studying to try out anymore.

Our basketball team won the interschool competition that year.

Although I can’t say I actually contributed to that victory, it gives me some pride to know that I wasn’t so very bad that I got in the way of our more talented team members doing their thang.

Strangely enough, the only place I really felt disgraced by my lack of coordination was at home.

My mother used to reassure me that although I lacked gross motor skills, I had phenomenal fine motor skills, and could put a coin into a moneybox at nine months of age.

This was mildly encouraging. Such skills would certainly come in handy in later life when I was performing surgery on maimed children in the third world. 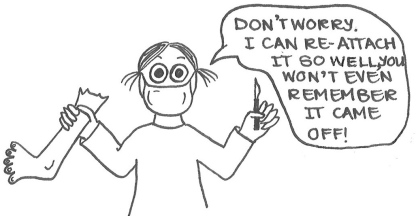 And teachers always appreciated my tidy bookwork, which was clearly a result of my abundant fine motor skills.

Unfortunately, calligraphy never did take off as a competitive sport, so these skills didn’t carry quite the weight that my brother’s soccer and cricketing achievements did.

The main source of my chagrin was dinnertime. My brother and I ate our dinner sitting on stools at the other side of the kitchen bench. It was a long way from our high perch to the carpeted floor, and whenever I dropped my food or spilled my drink, the plunge seemed to take an eternity.

I would watch the offending item falling in slow motion, my heart following its trajectory as it tumbled to the floor, where it would splatter on the prized woollen carpet. 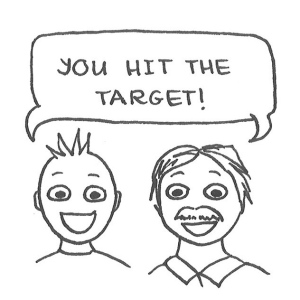 My brother and father would shout in simulated exaltation at my achievement.

It got to the point where they would already be speculating before the meal began: “Do you think she’ll hit the target tonight?”

Reflecting on this as an adult, I developed a theory: perhaps my uncoordination is a mental rather than a physical challenge – an idea that was reinforced in me so often as a child, that it became part of my identity. And it’s self-fulfilling, because every time I undertake a physical task in public, I am convinced I will stuff up somehow, before I’ve even begun. 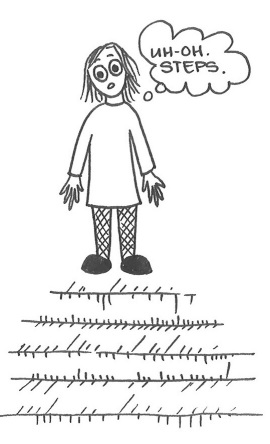 For a long time, I nurtured this idea in secret. I fantasised about the possibility of clawing back some self-belief and conquering the physical world.

Then one day, as I was getting to know my boyfriend, I expounded the theory to him.

He’s a fantastic sportsman who mentors other players on his team with great care and skill. Plus, he’s my boyfriend. It’s his job to think I’m great, even in my unfinest moments. If anyone could help me reclaim confidence in my physical capabilities, surely he was the person.

So I shared my hypothesis, and held my breath, waiting for his helpful and philosophical reply.

Instead he burst into laughter. There was no derision in it whatsoever, but his response jolted me irrevocably back to reality.

So I was forced to add ‘delusional’ alongside ‘unco’ in the inventory of my self-concept. Still, I went right back to trying out everything.

And I came up with an ambitious new approach – a plan to bide my time till the attrition of ageing delivers the physical supremacy I long for.

You see, we live a really long time in my family. If I can cling on till my nineties, I figure I’ll be the only old woman left in the pool. And that will be one hell of a sporting achievement!

10 thoughts on “The pursuit of sportiness”